Brain metastases refers to tumours in the brain that have spread from a cancer somewhere else in the body.

It often occurs in the context of a known cancer elsewhere, but is sometimes the first sign of the patient having a cancer at all.

Like any brain tumour they can present with symptoms of:

Sometimes they are causing no symptoms and are picked up on scans done for other reasons. 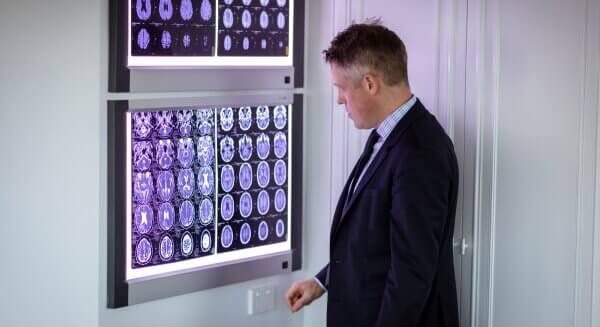 Treatment decisions depend on how many tumours, what size, what symptoms, whether the diagnosis is known and so forth.

These tumours usually have a very distinct border and interface with normal brain so surgery to remove them is often quite straightforward.

Surgery will almost always be followed by some radiation treatment – these days this is usually stereotactic irradiation of the cavity. This is because we do not remove a margin of normal tissue around the tumour and there may be microscopic cells therefore left behind. A randomized study performed several decades ago confirmed the recurrence rate was halved by using radiation after the surgery.

If the tumours are small (eg less than 2-3cm in maximal diameter) and causing relatively few symptoms stereotactic radiosurgery (outpatient specialised focused single dose radiation) can be used and is very well tolerated. It offers a similar chance of controlling the tumour as surgery plus radiation in the order of 90% for most tumours.

Whole brain radiotherapy used to be the mainstay for these lesions but is performed less and less as focal forms of radiation tend to be tolerated better.

Brain metastasis treatment is becoming increasingly specialised with the advent of targeted therapies. Until recently virtually no treatment given systemically (meaning to the body such as chemotherapy) got into the brain and therefore the metastases always had to be treated with focal means. There are now times when brain metastases can be observed if focal therapies that can have some brain activity are given.

Surveillance imaging is usually performed 3 monthly as a significant minority of patients may have another metastasis show up elsewhere in their brain after treatment, and if detected when small focused radiation will often be used.