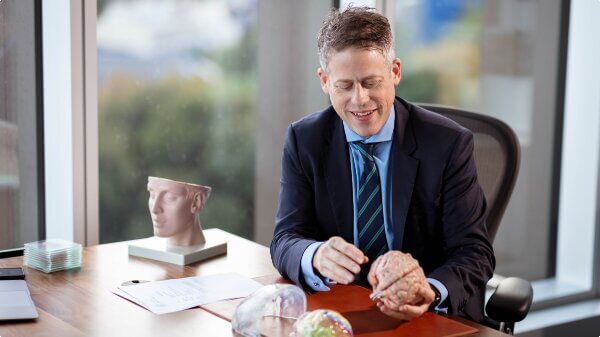 Dr Jonker is an Australian neurosurgeon with expertise in both operative neurosurgery and stereotactic radiosurgery.

His hospital appointments are at St Vincent’s Public and Private Hospitals, Royal Prince Alfred Hospital and Chris O’Brien Lifehouse at RPA in Sydney.

He completed his medical degree at the University of Sydney in 1999. By the time he graduated he was convinced that he wanted to pursue a career in neurosurgery and following an internship and residency at Royal Prince Alfred Hospital he undertook his neurosurgical training at Prince of Wales, Sydney Children’s, Royal North Shore, Canberra and Westmead hospitals. This culminated in the award of the FRACS (Neurosurgery) in January 2009.

In 2009 he travelled to Foothills Hospital in Calgary, Canada and to UCLA in Los Angeles, USA to undertake fellowships in Stereotactic and Functional Neurosurgery and Stereotactic Radiosurgery with Dr Zelma Kiss and Dr Antonio De Salles respectively. This has allowed Dr Jonker to specialise in the treatment of both brain and pituitary tumours and trigeminal neuralgia with both operative neurosurgery and stereotactic radiosurgery.

Dr Jonker has subspecialty expertise in Deep Brain Stimulation (DBS) for Parkinson’s Disease and other movement disorders including tremor and dystonia. Dr Jonker along with neurologist Dr Stephen Tisch, and more recently neurologist Dr Sam Bolitho have been working together in the highly successful DBS programme at St Vincent’s Hospitals.

Dr Jonker, Dr Tisch and neuroradiologist Dr Yael Barnett have subsequently established the first programme in Australia for MRI-Guided Focussed Ultrasound (MRgFUS) treatment of Tremor. St Vincent’s Hospital in Sydney leads the way in providing this procedure – since the launch of this technology many patients have been been successfully treated and had very positive outcomes.

In keeping with his subspecialty training in stereotactic and functional neurosurgery he has a particular interest in performing awake surgery for brain tumours in critical locations. He also uses intraoperative MRI at Royal Prince Alfred Hospital (Australia’s first and the only one in NSW) to guide safe maximal resection of tumours. In addition, Dr Jonker also undertakes surgery for other brain conditions such as epilepsy, hydrocephalus and trauma.

His interest in the technology and capabilities of stereotactic radiosurgery have led to Dr Jonker performing procedures using both the Novalis Tx Linear Accelerator and Gamma Knife systems to treat a range of conditions.

Dr Jonker holds a masters degree in epidemiology – the science of designing clinical research and applying the best available evidence to a patient’s problem. He is a Clinical Senior Lecturer at the University of Sydney. His research encompasses trigeminal neuralgia, MRgFUS, stereotactic radiosurgery and pituitary tumours. He is the neurosurgery academic lead at the RPA Insititute of Academic Surgery (RPAIAS).

Dr Jonker is the Chairman of the Department of Neurosurgery at St Vincent’s Private Hospital. He also serves on the Board of the Neurosurgical Society of Australasia, and is currently the treasurer. He is a member of the Congress of Neurological Surgeons (USA) and the American Society of Stereotactic and Functional Neurosurgery. He is on the medical advisory committee of the Trigeminal Neuralgia Association of Australia and in 2019 was elected to the board of the World Society for Stereotactic and Functional Neurosurgery.

Dr Jonker’s practice is “Central Neurosurgery” which refers to both the central Sydney location of his practice and his focus on neurosurgical conditions of the central nervous system.