This information is of a general nature only. Please consult your doctor for specific advice concerning your condition.

What is Stereotactic Radiosurgery?

Radiosurgery is the use of sophisticated technology to identify a target (usually a brain tumour) and apply a 3 dimensional dose of radiation precisely to that target (within an accuracy of around 1 mm). It is an alternative to standard open surgery in some patients.

Radiosurgery involves collaborative planning by the neurosurgeon and radiation oncologist to design a treatment that will be accurately shaped to the tumour with a rapid fall off of dose nearby so that other critical structures are spared.

If the treatment uses radiation and not a scalpel, why is it called radiosurgery?

There are 3 reasons why it is called radiosurgery –

Firstly, there is an emphasis on exactly targeting a tumour and avoiding injury to any surrounding structures, similar to traditional open surgery.

The third reason is historical. Radiosurgery originated from a neurosurgeon, who conceived of a method of doing neurosurgery where the X-ray replaced the scalpel as a form of knife.

What conditions are suitable for radiosurgery treatment?

The most commonly treated tumours are secondary brain tumours (also known as metastases or mets), acoustic neuromas, meningiomas, and pituitary adenomas. There are a couple of non-tumour conditions which are also commonly treated called arteriovenous malformations (AVMs) and trigeminal neuralgia.

Radiosurgery is not suitable for all patients, so it is best to visit a team that has both neurosurgery and radiation oncology expertise.

What are the common names of radiosurgery systems?

Names such as Cyberknife, Gamma Knife and Novalis refer to systems specifically developed for radiosurgery use, but other units use Varian or other equipment. 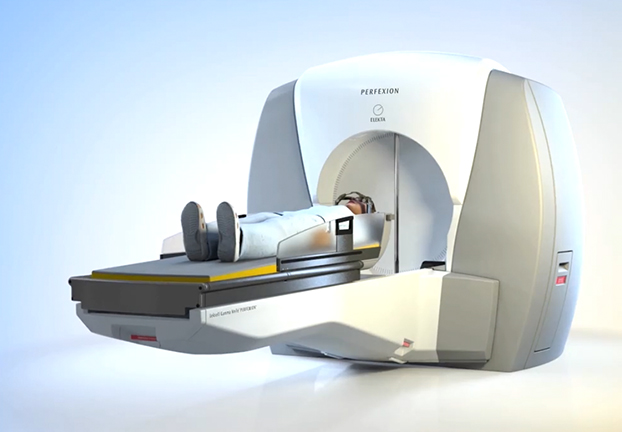 What are the differences between Gamma Knife and Novalis Linear Accelerator (LINAC) treatments?

Both Gamma Knife and Novalis Linear Accelerator are able to precisely deliver high single dose treatments to brain lesions – this is is the essence of stereotactic radiosurgery.

From a historical perspective the Gamma Knife was invented for the purpose of radiosurgery, whereas the linear accelerators (including Novalis) used advances in imaging and beam shaping to adapt the technology used for other radiation treatments for this purpose.

From a physics perspective both machines use high energy photons to deliver radiation. In the case of the Gamma Knife these are called “gamma rays” and are obtained from the natural radioactive decay of a cobalt source. In the case of the Novalis LINAC they are referred to as X-rays and are obtained by accelerating electrons through a series of oscillating electric potentials.

From a patient perspective there are a few differences in work flow – see below. There are also some inherent benefits in each of the systems which can be discussed in the individual context of your condition.

The Gamma Knife nurse will contact the patient and coordinate treatment with them.

Usually no scans are required prior to the day of treatment. Exceptions may include patients with multiple brain metastases and treatments for tremor.

On the day of the procedure, using local anaesthetic, a stereotactic head frame is placed. This will allow very precise positioning of the patient’s head without any movement during treatment.

MRI and CT scans will be performed with the head frame in place.

After some time has passed to allow for planning by Dr Jonker, the radiation oncologist and the physicist, the patient will be brought into the gamma knife machine and made comfortable on the treatment bed.

The treatment is then delivered. You cannot feel, hear or see the radiation. If a toilet break is required during treatment this is no problem as the treatment can be paused. Treatment times could be anywhere from 30 minutes to several hours but for most conditions may be around 1-1.5 hours.

The head frame is then removed and after a short period of observation the patient can be discharged.

A radiation therapist will contact the patient and coordinate the treatment with them.

A few days to a week prior to treatment the patient will have an appointment for specialised MRI scans to be obtained at Lifehouse, as well as the making of a plastic mask by the radiation therapists. A CT scan is also performed with the mask in place. The patient will then return home that day.

Planning is then performed by the team over the coming days, and the necessary checks conducted by the physicist.

The patient will then return to receive the stereotactic radiosurgery treatment on a specified day. They will be advised of details of their booking by the radiation therapists. You cannot feel, hear or see the radiation. Single dose treatment times could be anywhere from 30 minutes to several hours. Sometimes multiple doses are given over a week or even several weeks (often 5-6 weeks). In these cases the individual treatment times are shorter.

Do patients require an anaesthetic or admission to hospital?

No, patients receive their treatment whilst awake – and can return home the same day.

Is there any pain?

No – the X-rays are undetectable, you can’t see, hear or feel them!

What can I expect after the treatment?

It is common to feel a mild headache or some fatigue for a few days afterward. Usually, no special medications are required. Many patients will return to work the day following treatment. Most patient’s don’t lose any hair with this treatment, but occasionally patients will lose a very small amount of hair.

What follow-up is recommended?

Follow-up will initially be 4 weeks after your treatment, with the radiation oncologist or Dr Jonker. Further follow-up appointments will then be made depending on the individual diagnosis.

Do patients always have their treatment in a single session?

There is an alternative to radiosurgery called fractionated stereotactic radiotherapy. It differs only in that the same precise technology delivers the treatment to the tumour using smaller individual doses over multiple days.

Why would a patient have their tumour treated over multiple days when it might be more appealing to get it over and done with in a single session?

Certain tumours have important nerves intimately associated with them- or even within the tumour. In these cases it may not be desirable to give the high single dose of radiation to the tumour since a portion of the nerve may receive the high dose intended for the tumour, with potential for complications. This can be particularly relevant for tumours around the hearing (cochlear) nerve and seeing (optic) nerve.

I have heard about frameless radiosurgery, what is this?

Traditionally radiosurgery has required the application of a head frame to achieve the precise positioning of the patient (and their tumour) for their treatment.

What complications can occur?

This is always best discussed in the context of the patient’s individual condition.