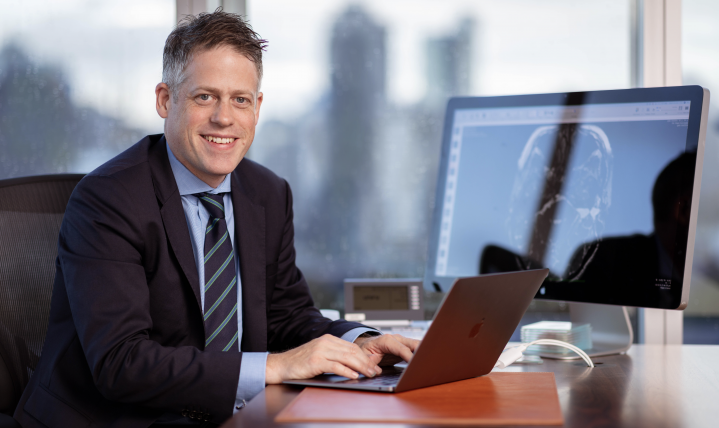 Since news emerged of the successful introduction into Australia of a non-invasive MRI guided ultrasound procedure to treat essential tremor, scores of patients have approached the team at St Vincent’s Hospital in Sydney for help.

According to Dr Jonker, however, they had anticipated this public reaction and, knowing they only had the resources to treat between 25 – 50 patients in the firstyear, they established protocols to help guide patient selection.

First, the essential tremor must predominantly affect the limbs (usually arms) rather than head or voice, it must be severe and impact daily function, it must be unresponsive to pharmacological treatments and it must significantly affect quality of life sometimes to the point of causing social isolation.

The new treatment was introduced in November 2018 via a $6 million MRI-guided Focussed Ultrasound (MRgFUS) that uses high frequency ultrasound beams to burn a tiny lesion in the thalamus to block tremor signals.

Patients are conscious throughout the procedure, able to give real-time feed-back to surgeons and neurologists and see a significant reduction in their tremor even while placed in the stereotactic frame.

Dr Jonker sees this technology as a natural extension to his specialist practice treating movement disorders including essential tremor and Parkinson’s Disease through Deep Brain Stimulation (DBS) and Stereotactic and Functional Neurosurgery.

He now works out of St Vincent’s public and private hospitals and the Royal Prince Alfred Hospital and is a clinical senior lecturer at the University of Sydney.

Dr Jonker said it had taken more than a year to source the funding to both buy the machine and subsidise procedures, present a business case to hospital administrators, establish ethics protocols and recruit the first patients.

Since then, six patients with severe tremors have been successfully treated.

“Clinical trials have been conducted overseas which show this procedure to be safe and effective and it has FDA approval in America but widespread public funding is not yet available in Australia,” Dr Jonker said.

“It would be wonderful to be able to offer this more widely and we are working on that at present.”

Dr Jonker said he became involved in introducing the new technique because it built on his work treating movement disorders through functional neurosurgery.

“I was exposed to deep brain stimulation (DBS) as a registrar at Sydney’s North Shore Hospital and I was hooked,” he said. “Stereotactic and functional neurosurgery greatly appealed to me because it is the only area of neurosurgery where we work directly with the micro- circuitry of the brain.

“It is also an area of neurosurgery where disabling conditions are routinely and quickly improved resulting in very happy patients.

Dr Jonker said patients undergoing MRgFUS are perhaps amongst the most satisfied.

“We have seen that patients who have had this new stereotactic procedure (MRgFUS) look ecstatic the following day – more so than with open surgery – perhaps because the process takes less out of them.”

He said the new MRgFUS procedure involved placing the patient’s head into a stereotactic headframe which focusses high frequency ultrasound waves of 650khz onto a tiny target and which uses water to control temperature because of the large amount of energy being used.

Using MRI imaging, the team locates the area of the thalamus which controls movement, then conducts a series of low-energy tests to assess the functional impact of the treatment before increasing the ultrasound waves to burn a lesion of between two and three millimetres.

“Essential tremor is caused by a derangement in some of the movement control circuits travelling through the thalamus,” Dr Jonker said.  “By creating a tiny lesion, we can block the signals causing the tremor.

“The most common risk in terms of side-effects is some initial unsteadiness but the risk of brain haemorrhage with this procedure is thought to be close to zero.

“However, trials have shown that the risk of an adverse outcome rises substantially if we treat both sides of the brain which means that if a patient has tremor in both hands, we will treat only one side – usually the dominant hand.

“This also means that we cannot use this technique for people with a head or voice tremor or where we want to treat tremor on both sides and in those cases we would typically use DBS.

“So far, we have had great success in the patients we have treated which is wonderful for them and for people with essential tremor in Australia.”

Dr Jonker said the team at St Vincent’s were now in the process of designing research projects based on the new procedure.

He said the machine used also offered an exciting range of future treatment possibilities. He said it had the capacity to break the blood-brain barrier which could revolutionise the delivery of drug therapies to treat brain tumours or even Alzheimer’s disease.

He also said that advances were being made across a range of neurological conditions including brain machine interfaces such as research into devices which could be implanted to help restore sight to the blind.

“While I expect there will always be a role for conventional open operative procedures, the most important thing is to be the advocate for the patient – and keep an open mind as to what the best technology might be to address their clinical problem.”